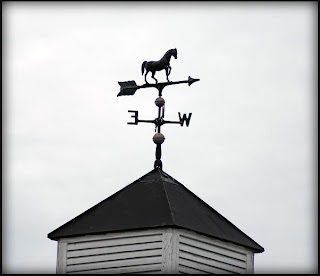 The other day, Kacey over at Wine on the Keyboard, issued a B&W Challenge. Just a little get-together, I guess, to share B&W photos. On my previous challenge post, I did two people photos. This time, I'm doing things that lend themselves to B&W. Well, at least they do in my eye. They'r'e practically black & white to begin with, so it's not much of a stretch.
Regardless, for the weathervane shot, it was a grey day and I just brightened it up a bit with photoshop. Looking at it now on the site, I think I should've straightened it up a wee bit, but I'm going to be lazy and not. 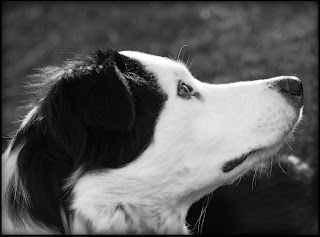 OMG, that e-trade commercial is on the television right now with that baby that sits in front of the camera and talks about stocks and how he had enough money leftover to rent the clown in his bedroom, BoBo. How weird is that commercial?
Ok, what was I saying?
The second photo is of George, our pup. He's well, he's already black & white. So I desaturated the photos (control+shift+u) and then I put borders around each, with a soft edge inside of them. Instructions are on the previous post. On the pup pic, I used Tracey's suggestion of making the white areas glow, and I lowered the opacity somewhat. I found her suggestion on the original challenge at Wine on the Keyboard.
Have a lovely evening everyone.

George is such a pretty boy no matter how you convert the photo. :D

I like the George photo better, well, because it's George *g. But the weather vane shot sure lent itself to being converted, didn't it? I like the soft edges you added too.

Both of those pictures turned out beautiful. I love the weather vane slightly crooked! It adds character.

I came over from Kacey's blog. I love your pictures!!!

I want to snuggle with George. No matter what color he happens to be...

Oh, I had to laugh . . . mental p mama, you would not like to snuggle with George right now. He's just returned from his 3rd Big Walk today and he smells like a swamp rat. His legs are black with muck and he is stinky! We washed it as best we could. And the rest of him is still fine. But, ew!!!

Ahh George....Stinky or not, he is just a beauty!

Great photos here - o alright - ALL your photos are good! I strive to be at your level of photographity (is that a word?? Oh well, you know what I mean - you're GOOD with a lens!).

Accidentally saw your this article, written very well, I like it very much. I think that this site has some real good news to everyone, I hope you can then continue!
Online Clothes Shopping