George goes shopping, and other stories 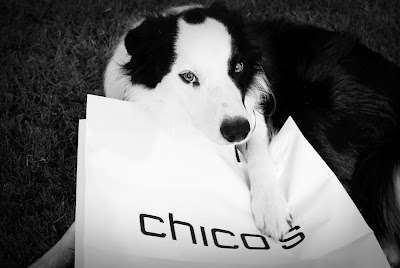 He's the dog-about-town, George is. Did you know that some stores actually allow pets inside? George went for a ride with me on Sunday on a mission to find um, well, actually it was some wine. It's rather annoying trying to find alcoholic beverages in the state of Pennsylvania. If you just want a six pack of beer, you either need to go to a bar and none of them are open early on Sunday, or you could just head downstate into Delaware where they actually sell six-packs of beer in normal places. Wine is sold in a "spirits shop" and liquor is sold at the state store. I really miss my favorite liquor store in Middletown, Delaware where they sold six-packs and cases of beer, a huge selection of wine, and of course, the liquor. So there I was, driving along on a beautiful Sunday morning. Um, looking for a wine store. And as I was glancing out the window thinking what a nice area this was, I saw a Chico's. So I zipped over into the next lane and headed towards Mecca. Er, I mean Chico's. I left George in the car right out front and when the salespeople saw him, they told me to bring him in. They told me that they allowed dogs to come in and hang out while their owners shop. Of course, the owners will be spending money, but regardless, George was a huge hit and was petted and fawned over by everyone. I just love this dog.

On another note, as most of you know by now, back in early July I started a photography blog. I didn't say anything about it other than to post a little header link along the right side of this page. If you haven't been there yet, you are welcome to come visit. I post a picture every single day. Usually even on Sundays.
And now I'd like to answer to a burning question posed by Mary of Little Red House. As most of you know, sometimes I say ding dang diddly which means "boy howdy" or "gosh, that is exciting" or even "oh, my God, did you see how huge her ass was?" So ding dang diddly can mean a host of different things. Mary comments about my husband, "So tell us, what do veddy proper Brits say when a phrase like 'ding dang diddly' is called for? I'm dying to know!" Well, Mary, I don't know how veddy proper my husband is at all. You'd never know he was British really; he doesn't have a pronounced accent or anything as he's been in this country since he was very young. Well, except for some of the phrases he uses. Oh, and the food he eats. He would never say anything as silly and ridiculous as ding dang diddly. Mary, what he would probably say is "bloody hell" which he pretty much uses for everything.
Bloody hell can be used as an exclamation, like "oh, wow". It could also be "darn it". But he mostly uses it when Blackie the cat meows to get in. Blackie will want in and out so much it makes your head spin. We used to have a pet door at the old place but there's no fence here so we don't use one. And when she comes a-meowing yet again, he will bellow "that bloody cat"! "bloody hell"! "she's a bloody pain in the a**"! And then he'll end it with a "Blimey." Here's a cool website on British slang terms that you may find interesting. I've heard an awful lot of them in my life and even use one or two of them myself.
Allrighty. I think that's it for now.
Until tomorrow, my friends.

Aw, shit, wish I could use "Bloody Hell" and really make it stick. Just don't have the chops, I guess. Endearing.

My dear British girlfriends (3 of them), whenever they see a good-looking guy that he's tasty. (Ohh, look at him - he's tasty!"
If talking about some food dish they love, it: "This dish is gorgeous!!

And I LOVE Chico's.

He is handsome! I bet he loved all the attention!

Corsage@A Dollop Of Me said...

When I first arrived in the UK some years back I stood in the kitchen with my British housemate while she was telling me that we needed more "Loo Rolls". I couldn't for the life of me understand what she meant! So it was a back and forth conversation of What? Loo Rolls! What? Loo Rolls!

I could swear I commented last night but maybe I only thought I did?
George is just too good looking for his own skin :) and loo rolls fantastic :) I have a couple friend who live in england and one of lifes greatest pleasures is to either talk to them on the phone or listen over the internet I laugh cause they tease me about My accent as if LOL

I'm a pushover for George photos. I think my two girls Kady and Dianora have a crush on him, although Dianora still lusts after the Bush's Scottie, Barney. LOVE Chico's! HATE shopping! Honestly, I used to love to shop when we lived in Chicago. Now all I want to do after work and on weekends is to stick close to home. I used to be more adventerous. Oh well...

George needs to run for president. I love all the expressions and it is always fun reading your posts.

I think you need to do a George calendar for all of us George fanatics. :) And I love "bloody hell!" My own response to our cat trying to get in our bedroom in the middle of the night is, "You ROYAL pain in MY ass!" (This is also occasionally used for my daughter, when she is being particularly teenaged...)
xoxo,
Mary

OK, I am having a deja vu moment here. I swear I looked at this posting last night. I am sure I wasn't up at 6 am this morning. Honestly, I did not take any sleeping enhancement last night. Am I dreaming? Yeah, and I went to your other site? can it be the timestamp is wrong?
Love the story about George going to Chico's.

Oh, thank goodness! I wasn't dreaming! Whew! I could tell stories of strange occurances after taking Ambien!
Thanks for setting the record straight!

Good day Kate, I think that one is more Australian, but I had a British friend once who used to say it. I think it's great that Chico's let George go shopping.
I gave your photography site a little plug today with an award if you want to come over and see it.
*hugs*
Heatherann

Chicos. I knew we were twins separated at birth...

Ding. Dang. Diddly. I'm driving my husband nuts with that one *g Thanks!

Now I love George even more.

Ha! Corsage ~ they probably think it's funny that we call them T.P.

How cool that they allow George to shop with you.. and how peculiar your alcohol sales situation is. I'll have to remember to check your other blog out regularly.