A feather and a compliment

Let me begin by saying that I've been up for hours. Hours, I tellya and I still haven't gotten a lick of housecleaning done. Saturday mornings, for me anyway, are for housekeeping chores. And I actually rather like turning something messy into something shining and fresh. But I do tend to put it off. Um, like today. 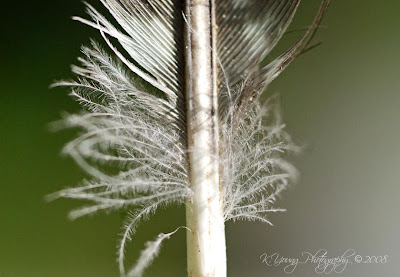 So far I've accomplished drinking 3 cups of coffee, with half and half. I love half and half. No flavored stuff for me, thank you. And never. Ever. Ever. Skim milk. I'd rather drink my coffee black. But here I go digressing. I've also accomplished packing up 6 weeks of plastic, glass and paper stuff from the garage and taking it to the recycling center up the road. And then driving down my favorite road to a store to get the aforementioned half and half. After that, it was time to take George on the Big Saturday Walk. I usually make this an hour and a half so he gets plenty tired and will nap while I clean. It's really difficult to tire out a border collie, however. Anyway, there we were on our walk, and we were heading towards home, down the canopy road. I've mentioned this road before here; it runs along part of the perimeter on this property, is shaded by huge trees and is wide enough for a couple of extra wide pick-ups trucks to pass each other, if need be.
What I haven't mentioned before is that exercise riders also use this road. Every Saturday, I run into at least one or two of them, riding racehorses. Sometimes they're galloping, and sometimes they're so quiet when they come up on me that I don't know they're there until they say something or one of the horses snorts loudly. And then I turn around and am surprised to see four riders right there next to me. But this morning, George was happily sniffing under bushes about 50 yards ahead of me when I noticed a solitary rider turn the corner ahead of him. I can tell the mount is skittish because the guy was patting him and began to approach very slowly. 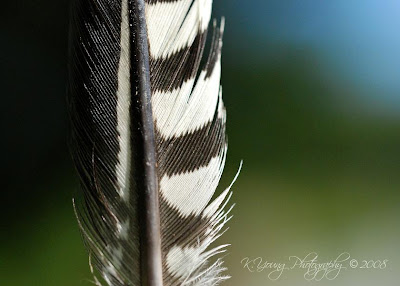 I whistled to George, who turned towards me and then I told him to sit. Then lie. He does both as I continued walking towards him, telling him he is a Good Dog. The exercise rider gets closer. He's riding a young horse, probably one that will race at Delaware Park tomorrow. There's a big farm nearby and I don't know if they're racehorses, or if they're steeplechase mounts. But this horse looked like it could bolt. I was at George's side now as he continued to stay down. The rider spoke gently to his horse and then said to me "what a beautiful day, isn't it?" I agreed with him. Then he said, "That's a really well-trained dog you have there." To which I replied, "thank you." He then told me that his mount was a little afraid of dogs, and he wanted to thank me for keeping him still while they passed. I told him "you're welcome", and to have a great day and then I let George off the command.
As we walked, I thought that hey, I do have a good dog. What a nice compliment. Then I looked down and saw this feather. I picked it up and saw that it was a bit dirty, but nonetheless would make a good subject for my macro lens. (Hey, this is about as thrilling as it gets around here, ya know. Newcomers need to realize this.) So here's my feather. I took it home and popped it into a section of fence to keep it still for my picture. I usually always have my gorillapod on my camera and I wrapped a piece of it around the fence to hold it still, and voila! (Sometimes it doesn't work to click on the pictures and I don't know why. If anyone knows, help is needed.)
And shortly afterwards, my husband drove by in the gator as I was crouching down to take another mushroom picture and shook his head. Ah, well.
Have a great Saturday, everyone! It's beautiful here in Pennsylvania ~~~~
Until tomorrow, my friends.

AH yes, the housework can wait! Have a lovely day!

I have finished my housework...yeah...drank 3 cups of coffee with flavored Italian sweet cream...yum...made waffles for hubby and me...and now have laundry to do. So you see, we share similar chores this beautiful Saturday morning.
Let me say that I find your blog very peaceful, relaxing, but mostly enjoyable!

...Love the second feather photo - beautiful! And how cute are those "gorillapods"? You know, it's probably a good thing I don't take up photography. Gosh, with the camera, the lenses, photo software, all the neat lil' gadgets, I'd be in the po' house! ;o) I'll just rely on you for the awesome photography, okay? lol...

...Enjoy your Saturday in whatever you do...blessings too... :o)

I like my coffee the same way...very strong...half and half, no sweetner, no flavorings. Great macro shots! My WT gets a kick out of seeing me hunkered over a bowl of soup with my camera, so I can relate. I didn't realize you lived in PA...my daughter lives in Philly.

Cathy, I finally finished and it's after 2. Dang.

Hey, Deb. I may have to try that Italian sweet cream. Sounds interesting . . .

tj, surprisingly enough, my husband bought me every single piece of photographic equipment that I own. Come to think of it, even the camera bag. He doesn't buy jewelry, but I am not a big jewelry person. He shows his love by buying me thngs that make me happy.

Willow, I was born in Philly, grew up in Jersey, lived in PA, VA, and MD. Am now back in PA. I have no idea what WT means. I tried searching on the internet to no avail! And I love a good cup of coffee. I have a friend who, when she's falling asleep, she has a smile on her face just thinking of the coffee she will drink in the morning. I so understand that!

A handsome dog as well as well-trained.

As for housework, I would if I knew where to start!

There's an award for you at mine!

What beautiful feather pics! I'm thinking that a macro lens is going to be on my Christmas list...

My family thinks I'm nuts when I'm taking pictures, too. And I will do almost ANYTHING to avoid housework. LOL

It's beautiful here in Jersey, too. Hope you are enjoying the nice weather. :)
xoxo,
Mary

I love it - the black box brought me here! My Saturday was SO much more excting tho ;)

That George! I'll dog-sit him any time, Kate!

As for coffee...I try not to drink it because the only way I can is if it full of half n half. No skim for me!

I sure wish I had run into you on my ride today instead of those that I did run into-- a rat terrier that chased us, a pack of four wheelers that do not have the good sense to stay off my property or at least stop until we are by.

We were on young horses too, who were wound for sound today, and had a child rider with us as well--very stressful

It's good luck to find a feather. It sounds as if you had a wonderful day. I like where you live. I can see it in my mind's eye and it looks beautiful.

And yes, you definitely have a very good dog!

recycling gives you Karma Points and the walk sounds lovely...so all in all, much better than housework. Trust me. Have I ever lied to you? Well, lied and got caught??

I was JUST telling my dh today that "we" SO need a macro lens...

Sounds like a wonderful walk. What a good boy. My border collie Sadie is afraid of horses! She would have bolted! :)

I enjoyed your story. Sound like a perfect day to me. :-)

What a wonderful way to spend the day!!

Surely not when the sun is shining!

That gift of a feather was a compliment too. It's lovely!

What a good dog. He is so smart and you have done a great job training him it sounds like. I think your priorities are straight....coffee, errands and lovely walk first. Housework will still be there.