Not the fruits of my labor 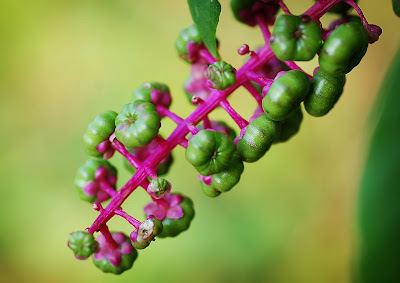 While George and I were walking yesterday evening, I came across some pokeweed. Now pokeweed isn't vile, but it is poisonous if ingested. This time of year though, I think the plant is almost pretty. Well, almost.
The first picture is a semi-mature cluster of berries. See how the stem is turning that bright purple color?
You have probably seen pokeweed. It can sometimes grow to 10 feet tall with its smooth fleshy stems and clusters of flowers that bear tiny fruit. As the fruit ripens, the clusters become heavy and drooping, resembling a grape bunch, and the stems holding the berries turn a bright red-purple.
This poisonous weed is often found in pastures, along fencerows and barnyards, in unfortunately close proximity to livestock. It's not very palatable, so most animals avoid it.
Here is a photo of the berries just beginning to burst forth from the flower. 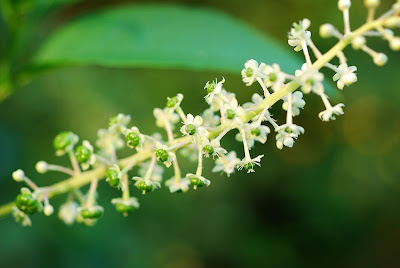 All parts of the common pokeweed are toxic to both humans and animals. Roots are the most poisonous, leaves and stems not as severe, but the toxicity increases with maturity of the plant. Children are most frequently poisoned by eating the raw berries. Infants are especially sensitive and have died from eating only a few raw berries. So this is not a nice plant. 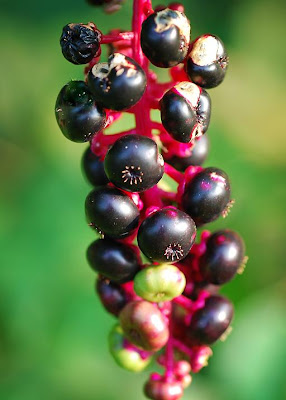 Above is a mature bunch of berries.
A few interesting tidbits about this roadside weed:
Supporters of President James Polk wore pokeweed twigs instead of campaign buttons during the 1845 campaign. And more importantly, medical researchers have isolated a protein (pokeweed antiviral protein or PAP) from pokeweed that is being used to try to inhibit the replication of the HIV virus in human cells.
I just found it interesting.
Allrighty then, that's it for my little biology lesson for the day.
Until tomorrow, my friends.

Wow! That is a lesson in biology. And the photos ain't too bad either! the first one almost doesn't look real! I am amazed.

We Southerners eat the stuff all the time. I say "we" editorially. I despise it. But, gathered young, and cooked correctly, it's quite edible. My grandmother loved it. My grandmother also ate animal guts and brains. She was sweet, but weird.

Anyway, "poke salat" is an old Southern dish from way, way back.

when I was a kid I loved to crush the berries and PAINT with them and especially my hands and skin :D ... I got more than one spanking over them.
My mother in law has cooked the young plants and they are good. I am afraid to try.
Hugs Laura

I've never seen it. I wonder if it grows out west.

Amazing how something so beautiful can be so wicked. I have never seen this around our area.

Suzette, yes, I've heard of poke salat, but it's really not recommended as food. It's got to be prepared just right and too many people have been inadvertently poisoned by it even though it was cooked.

Maybelline, it's indigneous to the East Coast.This is why you've not seen it.

Native American Indians used it for healing, too.

I love how your writing gives us an educational experience and eye candy to boot! I have seen pokeweed along the path in our comuunity but didn't know what it was. I even commented to Doughboy about how colorful it is. Thanks for the info! How do you know all this stuff????

It never ceases to amaze me how they find wonderful things to do with what most consider bad things. Who thinks up this stuff? "Let's use a poisonous plant to try to cure a terrible disease!"
Your pics are beautiful though, and I always love your lessons.
*hugs*

Thanks for the education! I took a photo similar to your first one, and was going to post it and ask if anyone could identify it. Glad to know about it's poisonous properties. It's really pretty, though, isn't it? As always, love your photos. :)
xoxo,
Mary

Oh I hate the stuff. My daughter swallowed some when she was a toddler and it scared me silly. She was fine she only got two berries so she did not get sick. We have it all over. It is pretty though!

Your pictures always amaze me. Another thing that amazes me is the plant life you have. Let me tell you we have just mile upon mile of high dessert. Not much likes to grow up here past 7,000 feet. Your pictures remind me that there is just so much this great country offers.

Those berries are scary. I LOVE salmon barries but am always scared to eat them because they look like another kind of berry that is toxic. I never get why people think that "natural" medicine is safe to self prescribe, some of the thing that grow right around your house could kill you!

I LOVE your photos and writing and always look forward to checking out your blog in the morning. Thanks.

The main reason polk is considered poisonus is because of the super high iron concentrate. If prepared correctly, though, it is edible. Not the berries, just the young plant leaves. But the preperation is really not most folks would take the time to do. I used to freeze snack-bags full after boiling and draining, boiling some more, draining, then mix small bags with mustard or collard greens with lambs quarter (another "weed"). It is very good and gives an enhanced flavor to other greens.

But yeah...you can get iron poisoning if not prepared correctly.

Welcome to Carin. I want to check out your blog to see where you live! And yes it's also called nightshade, Annie.

Thanks, Jan, for filling me in. I didn't know it was the iron content that actually caused it. I've read that when prepared properly it does taste very good.