Wind advisories are in effect for our area in Maryland and it's still howling out there. All night long it blew hard, waking me up at times. The skies are blue and clear, but the wind hasn't stopped all day.
Hey, it could be worse. We could be living in Caribou, Maine and gearing up for yet another big snowstorm tonight, possibly up to a foot. They've already had a whopping 180 inches of snow this winter. Can you imagine that? So, you see, it could be worse.

Pictured here is something you don't see too often. Don't these birds look like they're following the cardinal? Actually, what they're doing is taking a break from the wind. You can't see it in the picture, but to the right of the cardinal is a big walnut tree and it's blocking the wind just enough for the birds to rest a moment. They'd been eating seeds on the ground, on the back side of the tree, and I just happened to be outside with my camera. I was pretty far away, and that's why it's not such a clear shot, but you get the picture. Literally! 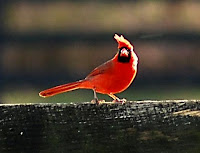 The cardinal was really getting blown around in this second shot, making him look like he was having a real bad hair day. It was so windy, in fact, that I didn't venture out for the today's walk. I went yesterday, in the rain, but not today. My husband spent the good part of an hour throwing the frisbee to George and he said that one time the wind took it and it went all the way down to the pond.
Anyway, George was pretty tired after the frisbee workout.
Today was a really good day, even though it was super busy at school. Everyone seemed to be in a good mood, what with it being the last day before our Spring Break. I was going to stop at the licorice store for a nice bottle of wine, but decided I didn't really need that. Besides, by the time I remembered wanting to stop there, I was already driving down the farm driveway. Darn! Then I remembered that I had some Yukon Jack in the cupboard and some nice grapefruits and that's what I ended up having to celebrate. Have you ever had this drink combination? I mean, I'm not condoning alcoholic consumption (well, maybe a little) and I'm not trying to promote the use of alcoholic beverages in order to celebrate something (yes, I am) but I do enjoy a drink every now and then.
Yukon Jack is a bourbon liqueur that really tastes quite good. It's advertised as "the Black Sheep of Canadian Liqueur" and it's unbelievably nice mixed with fresh grapefruit juice and just a tiny splash of grenadine. And anything that's the black sheep of something is right up my alley.
Be sure to stop back tomorrow at 6 PM for the Weekend Guessing Game. I'm warning you now that it may be difficult, but I could change my mind by tomorrow. You never know with me. And oh, you're really going to have to be on the ball about showing up at 6 PM est. You don't want my sisters to see it before you and end up winning. Again.

The pics of the birds are amazing!
Also thinking of trying the Yukon and grapefruit....have never had that one!

You continue to inpspire and motivate me!

Love that first shot. I had to look closely to make sure you didn't photoshop it ;-)

Have fun getting up early tomorrow and making your husband's breakfast...

Tracey, you came back. Hope you like the drink. One warning, though: watch out. YK is high proof.

Thanks, Kacey. If I'd Photoshopped it, I would have been honest about it! They really were lined up there like that, but only for about 10 seconds, enough to lift the camera, aim and shoot. Then poof, all gone.

I love the top pic. What a catch!

Those birds on that fence are sheer poetry. Have you started cooking yet? I'm hungry.

Oh, those pictures are terrific! You know I have a soft spot for birds....
Enjoy your break, and have a wonderful Easter!
xoxo,
Mary

I am loving the picture of the bad hair day cardinal. Something about the way his little mohawk in blowing makes me smile. Dear little fella.

Oh, I love the photo of the birds all lined up. How absolutely awesome!

We rarely see a cardinal, but when we got home from Good Friday church, we heard a cardinal singing way up in a tall evergreen tree. I wish he would stay.