St. Patrick's Day and the wearing of the green 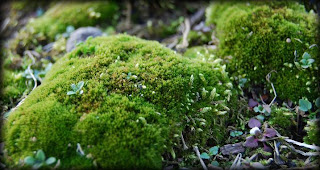 This is some fresh moss I took the other day while on a walk with George. The grass in Maryland is turning a nice shade of green, but ever so slowly.
I remember going to church one St. Patrick's Day a long time ago when I was just a little girl of around 10 years of age. St. Patrick's Day was a big deal in the Catholic religion and I dressed in green as my mother instructed, but I wore these new tights I had just gotten and they were a burnt orange color. My mother had an immediate conniption as soon as she saw me! She said, "Katy, for the love of God, what are you wearing?" To which I looked down at myself and said, "Some green and oh, I wanted to wear these new tights today." My mother then explained to me that the wearing of orange was forbidden on this day and I was to go up and change my tights immediately becuase now we're going to be late for church. She tried explaining things to me, but we were in a hurry and I was instructed to change and do it quickly.
Since then, I learned that the orange wearing was for the Protestants and the Catholics wore the green. The Irish flag is made up of three colors: green, orange and white. The orange and green we already know what they're for, but the white is the symbol of hope for peace between the two.
I really felt bad about wearing those tights that day. But I got over it. I don't really celebrate St. Patrick's Day other than to wear something green. And I never, ever have worn orange on this day. God, my mother would kill me.

You've educated me. I didn't know about the colors of the flag. Maybe you can tell me about "orange Irish" and "Black Irish". I thought orange stood for protestant and black for catholic?
I've a mix of both on my jumbled family tree.
Love the moss pic!
pic.

Happy St. Patrick's Day! Cool picture too! I am going to email you in a bit, I have some more "stuff" you may be interested in!

Have a Blessed day!
Meg

Whoops! I need to go change my shirt.

I love your blog and visit daily. :)

I think that you were a true peacemaker even at a tender age...wear your orange proudly!

Good to see you again, Meg. Thanks for the advice you sent me.

Aunt Jo, you're cracking me up. I'm glad you visit.

Annie, I have no idea what I'm talking about. I have to google everything. I can't imagine not being able to google for information. I sometimes even google words to make sure I spell them correctly. And then I still make spelling mistakes because I type too fast.

Hope everyone had a nice day.

That's hysterical. Orange is my favorite COLOR! I didn't know it was forbidden today.

I didn't realize that about the orange. I'm not Catholic OR Irish, but still wear a bit o' the green in honour of the Irish. I guess I should be wearin' th'orange! :D

I google to figure out how to spell words too! All the time. I'm a terrible speller.