I venture out for an afternoon walk 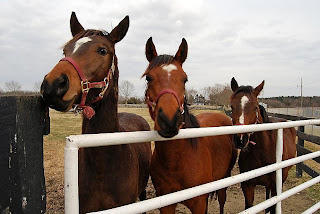 You know what I really miss? I miss having energy. I have not been for a walk for over a week now, due to that darn flu I'm getting over and today, I decided that I was going to try to take a walk. I didn't care how tired I was from working all day.
Come hell or high water, I was determined to walk down to the end of the driveway and back, a total of just over a half mile. And you know what else? Sometimes I just really don't have a lot to say. I said enough all day at school and really, my life is not that interesting. 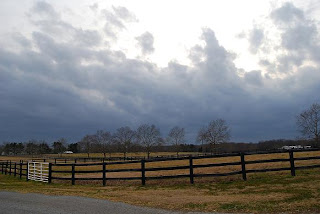 But I do live on a horse farm in the country and for those of you who crave country scenes, horses acting goofy, a lead-colored sky before dusk, and, well if this sort of stuff floats your boat, then by golly, you've come to the right place.
George was already pretty tired from the big walk my husband had just taken him on. So by the time I took him with me for this quick jaunt, his tongue was lolling out but hey, he was happy to be back at it. 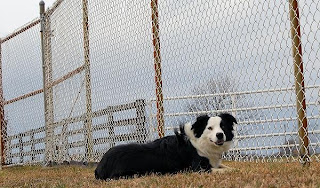 We came to the stud paddocks first and I went into the gate, leaving George outside. The entire paddock area is gaited with a very high fence because back in the late 70's/early 80's, when the great Northern Dancer stood at stud here, there was a theft of a prized stallion over in Ireland. The then-owners, because horses had ties here to both Ireland and England, decided to fence the entire area in. And so it remains today. 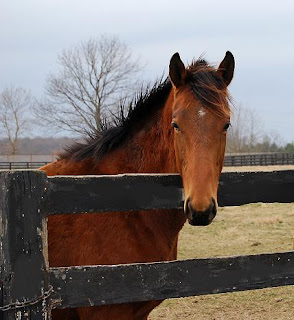 There's some new colts in the first paddock that must have just arrived because I've never seen them before. They remind me of Three Amigos and are pretty cute. Across the way from them are two good-looking young fellas. I got on the ground to get a shot going up and I think it scared them just a little bit, but I talked to them and told them it was ok. They weren't convinced, though. I'm sure they thought I was a crazy woman, but I don't care.
I loved how the sky looked this afternoon and the weather was really rather balmy. I tried to get a shot of how interesting it looked, but I couldn't quite capture it. By the time I turned around at the end of the driveway, I was getting pretty tired. 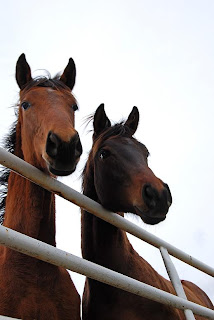 Oh well, tomorrow's another day. And I'm feeling better, so it's all good. Oh and guess what? My husband heard spring peeps for the first time this morning. Spring is coming!

I don't see how you can say your life isn't that interesting if you live on a horse farm. All those animals, nature and sky?

Isn't it funny how we take our health and energy for granted until it's gone. I know when I've recovered from a cold or flu and feel better, it's like I'm a whole new woman!

...Oh girl, you need to come and live my life for a week or two and you'll run back screaming to that oh-so-boring-life-on-a-horse-farm-surrounded-by-nothing-but-beauty and kiss the ground and vow to never leave it again - ever! lol... ;o)

...Well I'm just glad to hear you're feeling better! Love the photo of the three amigos and that sky photo? To die for! Gosh, even when you're ill you take killer photos! lol... ;o)

...Take good care of yourself and give George a pat on the head for me - he's such a cutie...

I bet people wonder about we who lay on the ground to get a good photo. It makes me laugh thinking of you talking to the horses as you are on the ground. When I was growing up we raised registered quarter horses and each one of us kids had to train our own horse and show it in 4-H. Great memories...I just might post about this.

Tsk Tsk Tsk... boring life? How could you think such a thing??

Here I am sitting in my little home doing the same thing day in and day out: changing diapers, wiping noses, and cleaning dishes. We only have one car, so I rarely get to go anywhere. Moved to polluted, dingy Detroit 4 years ago and haven't left outside of my county. Certainly not for lack of desire.

Since I was a child, I dreamed of owning & riding horses. I'm almost 40 and not even close to that dream. Probably won't ever see it come true either. Your life is a dream... and certainly not boring.

Since I've started visiting your blog, I have seen real photos of the Amish, beautiful horses, colorful birds and unusual feathers, and the antics of a handsome George. I always wonder what treasures your husband will bring home next and if I will be able to guess your next macro shot contest.

I look forward to a glimpse into your life everyday. :)

So glad you are feeling better...and those pictures are beautiful.

Thanks for the pictures!! I hope we have a farm with a 1/4mile driveway one day. Just seeing pictures from a farm (especially a horse farm!) makes me happy!!

Isn't it funny how a week of being ill just knocks it out of you. Makes you really appreciate good heath, doesn't it?

Dear Kate,
Please don't ever stop posting those terrific pictures and telling us about life on the farm. It is not boring at all! You live the life many of us always dreamed about, and your talent and personality shine through every post!
xoxo,
Mary

I'm at work now and I try to stay off my site while at work (I feel bad if I'm not actually 'working'). But I had to comment on all of your absolutely surprising comments on this post. I can't believe how kind and supportive you are all are, and I'd better go now before I start to sound like Sally Field.

I'm glad you're feeling better. Your pictures are outstanding and I love each and every one of them.

Why, you had plenty to say today. I like the leaden-sky photo....it does float my boat! Keep feeling better!