Don't fence me in 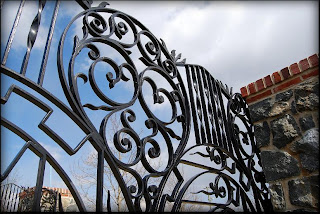 It's been a productive day. I actually did some much needed housekeeping, pacing myself because I really am getting better but it's a slow process. The sun has been going in and out all day. Why do I say that when it's not the sun but the clouds? I don't know. After chores, and because I really can't walk just yet in this cold wind, I took George for his second favorite thing: The Ride in the Car. And as a special reward for his supreme patience all week, we went to the pet store and he's got two new squeeky toys. He doesn't know about the second one yet. I'm saving it for later. 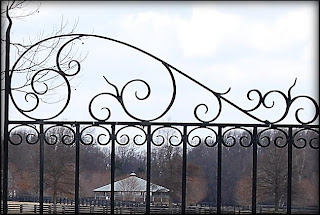 I brought the camera on the ride, just in case you know, and I came across all this interesting fencework. I've always liked wrought iron and I'd have to say that my favorite is the first one. It's situated on a piece of property that's been for sale for a couple of years and has just sold. So I pulled in like I owned the place and got out and started taking my pictures. There's no house on the property, just some paddocks and landscape. And this fence. And I also hear that the previous owner is not leaving the fence, but taking it with him. Must be some pretty special ironwork. 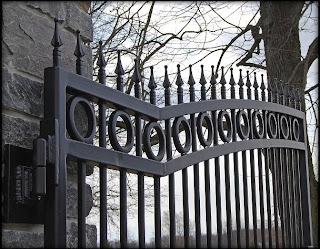 After the pet store, off to the Acme where I rarely shop because it's too expensive. But tonight I'm making dinner and I want rosemary & lemon roasted chicken, wild rice and carrots and onions, so I needed some supplies. George watches me go into the stores and then he lays down for a quick nap. By the time I get out he's always so happy and here's a picture of him in the car, glad to see me again. I loaded the groceries and then we were off, George looking out the windows and glad to be out and about. I put on my new Jack Johnson CD that I'm in love with and down the road we drove, listening to the music, feeling better than I have all week and loving it that the sun is out and shining down on us. 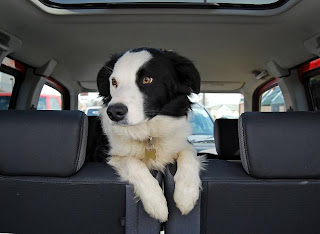 Stopped at a red light in Middletown, I began lusting after the little Volkswagen Beetle across the highway. What a beauty it was: the palest, silvery color of blue with a black ragtop. Beetles just make me smile. It's probably why I owned one a few years ago. I had to give it up, though. Another story for another day, I guess. But still, I miss that car.
It's good to be feeling better but I've still got a wicked deep cough that racks me and leaves me tired. Thankfully it didn't happen while I was in the Acme.
I stayed up late last night and tried to visit all the wonderful blogs that so many of you have. I only managed to see about half of what I wanted and found myself crying at a photo of a child that I saw on Girl's blog over at Fertile Mertile. It was just such a sweet, sweet picture and she was feeling down on herself and I remember feeling the same way as a young mother. I'm just prone to tears lately anyway, which is not at all like me. But I'll accept it because I know that it's partly menopausal and such is life. Beauty just brings me to tears sometimes.

Love those wrought-iron pictures....very striking! George.....he's striking, too, with his black & white face.

About the menopausal tears thing......its got me in its throes right now, too.

Tears were not my intention but thank you for reading.

I love that it was an eraser. Made me think, hard... to hard as I didn't even try to guess, hee.

Your pics make me want to go out and find some to photograph!

That fence is gorgeous. It makes me want to see the rest of the house! It must be quite a place.

Can I come over for dinner? You are making my favorite! Yum.