Are you my mother? 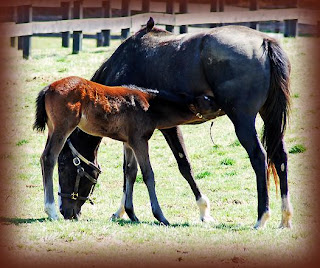 After yesterday's near-disaster with the couch, I took George on a walk past the paddocks that hold the mares and foals. There's one huge paddock and several smaller ones. The smaller ones are for the most recent-born foals. Since George knew I had been mad at him, he was on his best behavior and I only had to leash him once. When I told him to sit and stay, he did. He also heels when told. So I didn't have any qualms about walking him through there.
I took a lot of pictures yesterday and am only posting a few this morning. It's always nice to get a couple of babies who are having a nice nourishing drink from their mother. And, if you look closely, you'll see that the mare in the first photo has a bird sitting on her back. It's a starling. 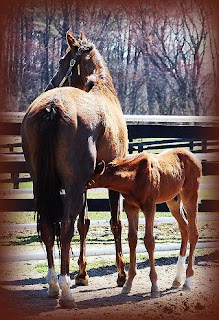 When I was working on the pictures last night, I showed that one to my husband. I was really surprised, but he said those darn starlings are always doing that. I saw him coming down the road with his farm truck and I took a picture of him, but he gave me a hard time of it last night, saying that he didn't want me taking pictures of him all the time and putting them "out there". "But I always ask permission", I told him. And really, I wouldn't put a bad photo of him up.
But still, if it makes him uncomfortable, then I won't. I told him that not many people read this anyway, but he pointed to the counter gage at the bottom and proved to me that wasn't true anymore. 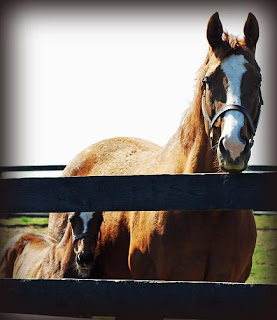 Back to the horses, now.
While I was out there taking pictures, I was constantly hearing the whinnying of youngsters who had just woken up and couldn't find their mother. The mothers usually don't wander off too far when their young one is taking a nap in the grass in the sunshine. It's always sweet to see the little reunion, just after a nap, between the mother and her newborn.
The very last photo here is of the newest newborn. I only know this because of the little paddock they were in. Enjoy! And have a wonderful day.
I'll post the winner, if we have one, of WGG#10 tonight by 6 PM. Maybe we already have a winner. I'm not telling.

So sweet. Aren't baby anythings just so adorable. It made me sigh.

I am *not* showing any of these photos to my horse crazy oldest daughter! She'd die!! That last photo is gorgeous.

As far as your hubby... tell him this: stat counters show everything. Even when a person visits multiple times (like me) or when a spider bot hits the page (like Google to rank your page in their search engine).

Its so nice the mothers and foals can stay together. On a dairy, we move the calves shortly after birth and then bottle-feed them, and the mother moves into the barn with the milk cows. That's just the way it has to be.

Your photos are beautiful. Horse scenes are a treat for me to see.

Oh that last photo is so sweet. This is why I love spring so much. Nothing better than newborns.