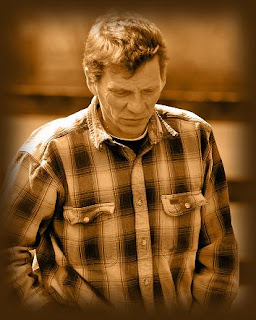 I like the duotone effect of a picture and this is one of my first attempts. I took this picture of my husband in our backyard on Sunday and I took the picture of George on the same day. I took the clouds on a different day last month. Scott Kelby gives a fairly simple step-by-step procedure on the making of a fake duotone in his book, The Photoshop CS2 Book for Digital Photographers, but I had a problem with holding down my eyedropper sampler button and moving it to a select duotone photo on photos.com. 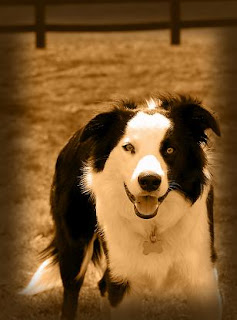 Basically, Scott wants you to find another duotone photo that has a color in it that you like and you'll be set. He says he goes to photos.com and search for duotones. I did that and only found one or two that I liked but he says that as soon as he finds the one he likes, he goes back to Photoshop (and this, on my computer at least, minimizes the site you've just come from) and presses the letter "I" to get the eyedropper tool and then click-and-hold anywhere within his image area, and then (while keeping the mosue button held down), he drags his cursor outside of Photoshop and onto the photo he's chosen from the other site.
Confused yet? None of this dragging stuff worked for me, so I ended up right clicking on a picture I wanted from another site and then saving it as a small file, and opening it up in Photoshop next to the picture I wanted to turn into a duotone. I'm sure I've done wrong.
Still confused? You don't have to be, really. I found a couple of colors for you to use. You don't even have to go searching. So let's begin.
Step One: In Photoshop, open up the photo you want to turn into a duotone. (Make a duplicate of it if you like, in order to keep the original).
Step Two: Set your foreground color (double click on it; it's over there on the left bar, under your eyedropper tool and your zoom tool) to d89c5a (if you don't like that one, try some more that are around that color when you open it up. I also used 64650f).
Step Three: Now that your foreground color is selected, go to your layers palette and click on the Create a New Layer icon. Then, press Option-Delete (PC: Alt-Backspace) to fill this new blank layer with your sampled color. The color will fill your image area, hiding your photo, but don't worry. We'll be fine.
Step Four: While still in the Layers palette, change the blend mode of this color layer to Color. Voila! C'est finis!
Then I flattened the image.
On these photos, I also used the vignetting effect, which can be found here. 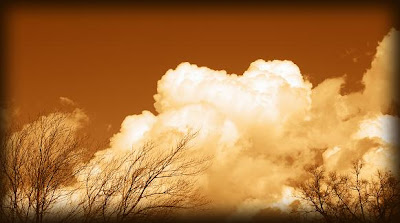 When doing the vignetting on a duotone photo, I used my eye-dropper sampler tool and chose the darkest color in the completed photo as my foreground color.
Have fun! And if you don't have Photoshop, I apologize for the content of this post. But I hope you enjoyed the photos, nonetheless!

Ok, kate. Here is a COMMENT!!!!
Thanks for not mentioning my name in the Friday blog (mmmm...oh, yeah, it WAS there!). Your pics today were beautiful! Thanks for inspiring me to be a better photographer!! You are, as always, amazing!!

Wow, Tracey! Your first comment. And see, you don't even sound like a dork. You did it. And I'm so glad I could inspire you. It means a lot to me.

Yes, your name was there. But it was a good mention. Thanks for visiting. Makes it all worth it when people stop by.

Wow, cool...can I send you all my pics and you can fix them up for me? They look great.

Hey, that's a great how to for duotone. So many post processing tricks to try, so little time...

I haven't tried this trick yet. I'm hoping my son teaches me some new ones on spring break.

That all sounds very complicated but I do love the final products! Well done. :D

Wonderful picture! I love it!

I HAVE to learn about Photoshop!!

Oh, and to the people I work with who have come to me and told me how much they love the pic of my husband, well thanks to all of you, too. I didn't even know how many of you read this blog!

And yes, our sons really DO take after him in their looks, don't they?

Russell, I won't say it's easy to learn it, but it's easier than I had originally thought when I first opened up Photoshop. I bought a couple of Scott Kelby's book and they've been wonderful. Also, I visit Pioneer Woman's site and she has a lot of great tips.

Those photos are exquisite. I really like the effect on your husband's shirt. And the clouds - what can I say! Beautiful!

Hi, Kate,
Love your site and the pictures are beautiful. I understand that you have a FAN club at work. I know that you are popular with your blog, but I had no idea that you were so popular at work too. I would be most grateful if you would let me know who to contact for information on how to join your Fan club.

Fave Babe,
I am surprised that you were unaware of your sisters popularity at work. People are actually rushing to luch so that they can sit next to her. She is always invited to ALL of the parties that the faculty members have outside of work and people are always asking to sit with her. I wish I was as half as popular as your sister is, you are so lucky to have such a sister.

Wow, Kate, they are amazing photos! Thanks for the lesson -- I'm going to try it soon.
xoxo,
Mary

I can't help it if people want to be around me. It's just my charismatic and effervescent personality.

(and really, people are NOT rushing to lunch just to sit next to me! They're just hungry)

Ooohhh I like that last one!! You know... I hadn't done a duotoned photo yet... that may need to be my photo project for this weekend. :)

Christine and Mary, it's a lot of fun. You're going to love it.

Looks like you're married to Marlboro man, too.....(I say that because of other bloggers who call their hubby that.) He shouldn't be shy about being showcased on your blog!!

The clouds are stunning in duotone!