This kinda stuff excites me 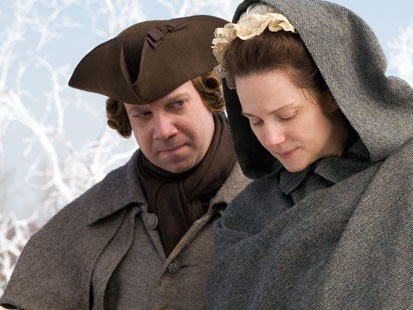 Little things get me going, like a nice day, happy people, cute dogs. A good movie can make me feel good and frankly, good television excites me, too.
Tonight on HBO, a 7-part miniseries starring Paul Giamatti as "John Adams" premiers. I love it when history is told through television, but more often than not, it's ruined for me because these sort of documentaries are cookie-cut to fit prime time America's version of history. But after reading the reviews of "John Adams" in today's Sunday paper, I can't wait to see it tonight. It's about our country's first 50 years. It's about ideas and one man's political education and really, it's rare for television to do this.
Paul Giamatti says, "The language alone was something that made it hard for me to believe that somebody was actually going to put this on television. To have people talking at this high level and with this amount of intelligence is just utterly unique for commercial TV."
Ok, now I REALLY want to see it. Tonight is supposed to open against a backdrop of a dreary and endless gray of a New England winter. And the entire mini-series is filled with actors who are speaking in historically accurate English accents, complete with all the big ideas from the 18th century. You know, ideas like life, liberty and the pursuit of happiness?
This show is produced by Tom Hanks, whom I've always admired. It's based on a book written by David McCullough, who I remember from PBS' American Experiece. Today's Baltimore Sun says that "the opening sequence is representative of the way in which the series successfully pulls viewers out of the present and transports them to 18th-century life as it was brutally lived on the ground - rather than in the peretrified portraits of Founding Fathers that hang in schools."
Wow! Ok, they had me at Paul Giamatti and Tom Hanks, but now I simply must see this series. Did I mention that Laura Linney plays Abigail Adams? This could be really good.
You know, you hear people say that life back then was 'a much simpler time'. And I've never thought so. It was damn hard back then. To travel from Boston to Philadelphia on horseback, in the dead of winter, well THAT'S hard. It's why the mortality rate was lower. I don't think I'd like seeing some of the scenes, which, from what I've read, include a tar and feathering (ouch), and Abigail Adams' children being innoculated against small pox. There's no needles involved. Apparently, only knives (I'll probably close my eyes). But it goes to show how much we take for granted today. It took guts to survive in the early part of our country's history.
And I can't wait to see this show when it premiers tonight. If you're interested, it's on HBO at 8 PM.
(image courtesy ABCnews.com/images)

I loved this book, but will have to wait for Netflix for the show since we don't have HBO. I hope it is as good as the book.

Kate, you are welcome. I am glad to hear that your tooth is fixed. I guess that this means that you can now eat more tootsie rolls. Ha! Ha!

How long of a drive is it from NYC to your house?
I don't have HBO :(

This series certainly has gotten a lot of press. There are even posters in our local post office.

I am going to hold out and get it from Netflix so I can watch it on my own terms...But let us know how you like it!

Robin and Dlyn, I'd wait for Netflix too but I have HBO and I don't mind watching it on their terms. I'll let you know how it is.

Rich, you know I cannot resist tootsie rolls, but they are the devil. So I must resist. Stop bringing them to my desk and taunting me. But really, thank you so much for fixing that scratch on my car! Awesome.

Miriam, maybe you can do the Netflix thing, too, because it's like 4 or 5 hours from where you live to my place. It would take so long to go back and forth! Ha!

i've been watching. it's really interesting! the episodes are on demand too, so you can watch whenever you want!