A ghost story at the Inn at Jim Thorpe 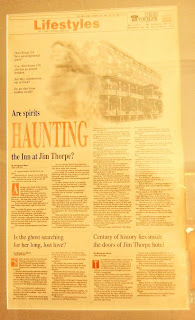 This is the second part of our 3-day stay in Jim Thorpe, PA.
I’ve promised you a ghost story, but what I have is such a small offering, and I hope you’re not too disappointed.
As I mentioned in the previous post, my friend, Karen, and I took a road trip to the town of Jim Thorpe, PA and arrived at the inn on Wednesday and checked into our room. The Inn at Jim Thorpe is very Victorian, and very old fashioned, and Karen summed it up best while walking down the long hallway to our room, and saying “Redrum”. Quick! Who can name that movie? Shimmy Mom, are you listening?
Anyway, it really wasn't a bad feeling. The hallway just seemed to go such a long way and with the carpet and the decor and all the doors, I knew just what she meant.
There were also framed vintage photographs that decorated the walls, and on one wall was the newspaper article I have pictured here, which was printed in October, 1996. It tells of a ghost who haunts two of the rooms (and maybe more) at the Inn. I figured it was probably hype, and didn't give it a second thought.
That evening found us on the balcony having wine with some new friends we had just met. We had room service deliver our dinner to the balcony and had another bottle of wine. Later on in the evening, yet another bottle of wine arrived and we opted to take half of that one back to the room, saying goodnight to our new friends. We didn't have a frig in our room, so I went to the basement to get some ice and then I put the half-empty bottle in the bathroom sink. And then we both fell asleep . . . (don't judge me about the wine, ok? Others were sharing!) 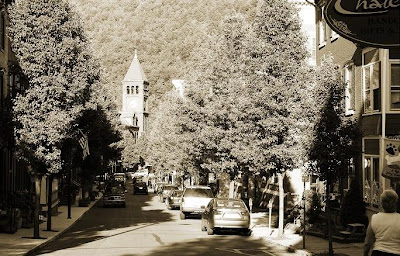 In the morning, we woke up and the wine was gone. The empty bottle was in the trash can, but we couldn't find the cork. I know that I did not get up and finish any more wine, nor did Karen. The only thing I could think of was that the ghost who haunts the inn had decided that we had enough, so she poured it out and put the empty bottle in the trash can. No, really. Neither of us did it and I distinctly remember leaving the wine on ice in the sink!
If you'd like to read more guests comments about the ghost at the inn, you may want to visit this site.
The newspaper article I've pictured above mentions a parapsychologist named Marja Schantz who explains that the ghost is a gentle soul who remains at the inn because she is welcome there. She and her lover had planned a rendevouz there, probably back when it was called The American House. They had each reserved a room on the same floor, but a new employee was working the front desk and gave her a room on a different floor than that of her lover. When he arrived later, he wasn't able to find her. And in those days, it was considered very improper to ask at the desk for the room number of the other. Desperate for her lover, and perhaps for her situation, she ended up committing suicide in her room.
It's a sad story, if it's true. But weird things do happen at the inn. 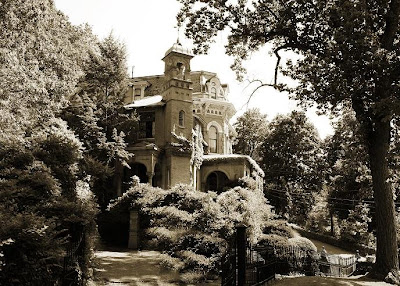 The Victorian home you see above is the Harry Packer mansion. Harry was Asa Packer's son and a house was built right next door to his parents on Mansion Hill. On the other side of the home is a carriage house. The Harry Packer mansion was used as the model for the Haunted Mansion ride at Disneyland, which is another interesting tidbit I picked up. They also have a 10-room bed & breakfast that includes rooms in the carriage house, and they host Murder Mysteries there. Sounds fun to me! 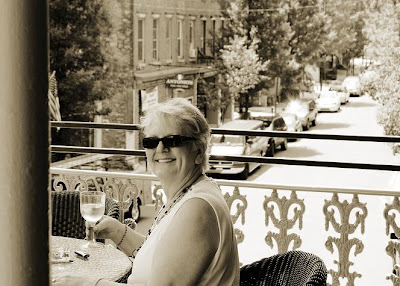 Here's my friend, Karen, on that lovely balcony. We spent the second day walking some trails which I'll share with you tomorrow. The weather was perfect for our trip and if you're in the area, I suggest you visit this lovely town.
Oh, and sorry about all the b&w photos; I just thought they lent a 'ghostly air' to this post.
POSTSCRIPT: It's well over a month since I've posted this story and I've just found a fellow blogger who lives in OK, the home of Jim Thorpe. She's got her history lesson posted. Please stop by to give it a read if you're interested in Jim Thorpe, the person.
To be continued tomorrow!

I had no idea the Packer mansion was the basis for the Disney World Haunted Mansion - but it most certainly is the same!

Take care and I really enjoy this series you are doing.

Great story. I love hearing about the unexplained.... from a safe distance. ;) The photos are perfect for the tale.

Hurry up! I can hardly wait for the next chapter!

The Shining?! I am a total wimp and RARELY watch horror movies. (Had to get hubby's help on that one.)If it looked like the Overlook Inn I might have run screaming. hehe.
But the place looks beautiful. and it sounds like so much fun. If my hubby would stay there. ALL Coasties are superstitious and believe in ghosts, did you know that? It's true.

HA! Must be something about PA, we live an hour and a half away from Jim Thorpe...every winter we'll go WEEKS when all I can think about is how much our snow covered property reminds me of The Shining!

Shimmy Mom got it right with The Shining, a movie that still gives me the creeps. Redrum is murder spelled backwards. And the hallways at the Inn at Jim Thorpe aren't nearly as long and as wide as the Overlook Inn, but the decor was exactly the same.

Years ago, when the kids were young, my husband acquired a horse and wanted to name her Red Rum. "No!!!" I screamed. I guess he'd never seen the movie . . .

Oh, and thanks for liking the black & white pics. I'm using some of Kevin Kubota's action set #1. My favorite, and the one I used for this post is the Chocolate Syrup 1 and 2. And, best of all, it's not fattening.

I wish I were there! Looks so wonderful...

Loved the ghost story. Yep, sounds like a ghostie to me!

I love ghost stories and thinking that any place could be haunted. The black and white photos do go well with the story. Fun!