Nearing the end of our road trip 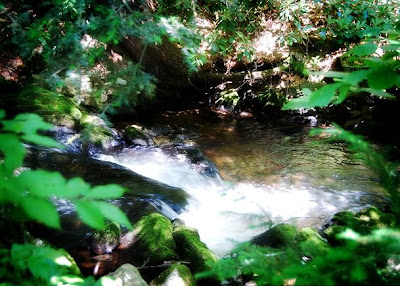 This is the third, but I've decided it's not the final chapter of my road trip adventure I took last week with my friend, Karen. I just had such a relaxing time in a new place that I ended up falling in love with and wanted to share it with you. If you don't mind, the story will continue tomorrow for the final time. So here goes. 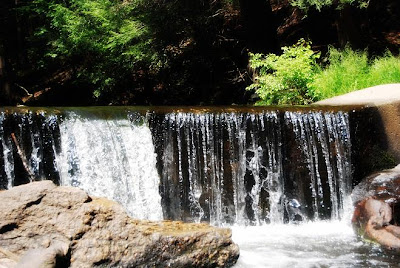 On the second day, I wanted to travel around and find my way around, maybe take a little hike and get to know the area better. Our new friends we'd met on the balcony of the inn told us of a short hike to a waterfall and gave us driving directions. After a breakfast on the lower veranda of fruit, whole wheat bagel and fresh-squeezed orange juice, we put on our walking shoes and headed out in my trusty Honda Element for points unknown. We found the state park trail head with no problem, and the sign which warned us to be cautious and stated that many people fall, yadda, yadda, yadda. Not to take it lightly, but I've seen warnings like this before while hiking in Shenandoah National Park and I knew that if it got treacherous, I was definitely turning back. So off we went. 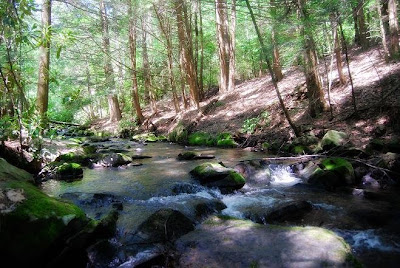 But the trail wasn't marked AT ALL and when we got to a crosspoint, there was nothing indicating which way to go. I could hear what sounded like it could be a waterfall off in the distance, but I could hear water in the opposite direction as well. So we hiked back to the beginning where we ran into a local girl that was just leaving who told us that the quicker way to get there was to shimmy through the fence at the end of the parking lot.
So, off we traveled to the far end of the parking lot, but there was no shimmying through THIS fence. It was wedged tight up to a huge rock. She did tell us that she hadn't been on the falls trail for years, so that could explain it. So down we went again, trying to find the trail. Eventually, we gave up and hiked back to the car where we saw another local, an older gentleman, who told us to go back the way we had come, go under the bridge, and then climb up an embankment using the trees to help pull ourselves up. Once up, he said, it's a fairly level hike to the falls. He warned us to be careful climbing up that embankment, because it's rough going. Karen and I looked at each other after he left and we both knew we weren't climbing trees up any embankment. So the falls hike ended there. Now we knew why the people from the balcony said that they only had gone so far, and then turned back! 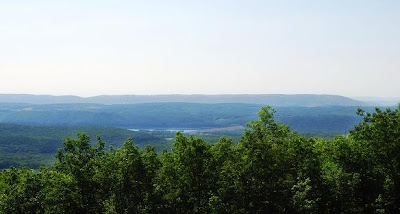 Back in the car, we decided to head up to Penn's Peak, a short drive away. Penn's Peak is a concert venue that also houses a restaurant and a lively bar. The Black Crows were scheduled to play on the weekend. The view can be seen here in this picture above. I took it off the balcony of the restaurant. Somebody wanted a Bloody Mary but fortunately (or unfortunately, depending on who you are), the bar wasn't open yet.
After that, we drove the quiet country roads, one that was labeled "Fairyland Drive", and wound through a little wooded section. Really nice!
We then decided to check out a B&B we'd seen advertised on a brochure. It's located on the back mountain by Jim Thorpe. Heading up the road to the B&B, we spied a small family coming out of the woods and saw that there was a trail down there. We parked and walked a lovely little trail to a small waterfall and were glad that we finally got to see a waterfall, even though it was just little one! The pictures at the beginning of this post were all taken on this little trail. Up at the B&B, the host showed us around to all the rooms, which weren't booked that particular weekend. The B&B owners are both artists, the husband apparently well-known for his chain-mail jewelry. Their place is called Hill Home Forge and if you click on this link, you can view the jewelry and stained glass and there's a link to the B&B. I didn't take any pictures while there because I thought it would be rude to do so. They have three eclectic rooms in which to stay, the most costly being $175 per night. If you're staying for a couple of nights, they'll teach you stained glass and you can go home with a suncatcher or another small item that you've made yourself. I don't enjoy staying at places where the owners live as well, but if you're into that sort of scene, this place is awesome. Nic's wife, Eileen, took us into their home and our jaws dropped. It's mission-designed with stained glass and woodwork cutouts and the artwork was incredible. Sometimes, when I see things that are this beautiful, my heart soars like an eagle. I've used that phrase since I heard it in a movie I saw over 25 years ago. Quick! Can you name it? 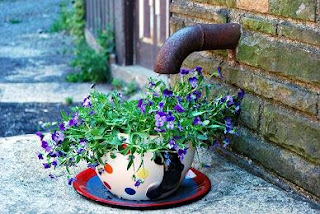 Nic and Eileen East's jewelry collection is extensive and if I had more money to spend, I would have shelled it out for their one-of-a kind glass beaded and silver jewelry, or one of Nic's chain-mail bracelets or necklaces. I had no idea the amount of work that went into making chain mail, and all the patterns he uses. I was truly impressed. Back in town, at one of the shops, we found out that Nic's jewelry was famous in those parts and his wife's jewelry is well-regarded as well. 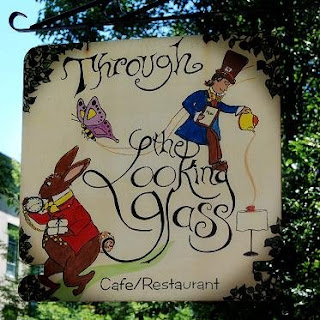 Later in the afternoon, after a fantastic lunch on the porch at a funky place called "Through the Looking Glass", we visited the little shops in town that were now open. Most don't open on the weekdays until Thursday at 11 am. And they close early! It was my only complaint about the town. You'll be walking along and you'll see a shop, and more often than not, it would be closed.

In this shop, I found some soap that Mental Pause Mama might enjoy. Hmmm, scary graphics. Her friend, Tombstone Annie might like this body cream. I don't know why I thought this, I just did.

We found a nice wine purveyor on Race Street, between St. Mark's Church and the Black Bread Restaurant, that offered tastings and the wine was excellent. The wine shop also featured some vintage photographs of the town in its heyday in the mid 1800's. We bought two bottles of white, one a steal at only $6 and it was getting late, so we headed back to the hotel for another relaxing evening.
To be continued tomorrow!

Did you get me some??? How did you know I have a thing for soap? Especially named after me...Thanks for thinking of me. I love these photos!

Your trip sounds wonderful Kate. Love the pictures of the falls. Beautiful countryside.

KATE i had no idea this is where you were going! this is where my fiance is a teacher! I love through the looking glass and that ENTIRE town never ceases to amaze me. we probably walked right be each other. weird.

the little rocky riverbank...past the railroad tracks..thats where I got engaged. gosh..i wish i had known..i could have introduced you to some of the characters around town!

Awesome, CountryMouse! Can't believe it. It truly is a small world. I just love it there.

MP Mama,I had no idea you had a penchant for soap and would have purchased them had I known. (I sound so classy, don't I?)

Treasia, yes. It was excellent.

i just came across your blog today - your pictures are great! especially the ones in the woods - what amazing light! i have a nikon d40 and love it.

and great story about the whino-ghost! LOL

This road trip sounds so much fun and it certainly seems to be what you needed. I am getting ready to go to the Oregon coast with my sister for a week. I love reading about everything and am so impressed you can document it so well. My memory at the end of the day stinks....I don't think I could do this nearly as well as you do.