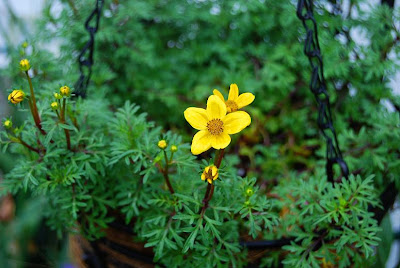 They don't always get me down, especially this week. I have off from work all this week. I have no plans, other than a road trip later on with my good friend, Karen, that I'm looking forward to. But Monday, I have some routine medical stuff to deal with, and have scheduled several appointments because I have off. And Tuesday is George's vet appointment. It's a big day for George on Tuesday.
I took these pictures the other day after it had rained. Can you see the little water droplets in the wet grass? 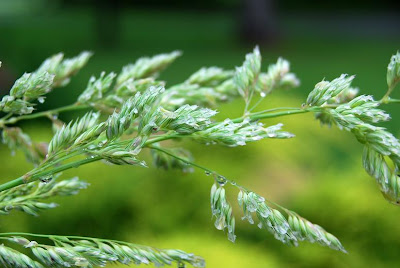 It's been a steambath here in Maryland all weekend and we've had the air conditioning on since Saturday morning. Today, our power went out several times and stayed off for hours, but still, our house stayed cooler than it was outside. Tonight, the power went out again as I was falling asleep. When it came back on, about an hour later, I got up thinking that hey, I could maybe get onto my site because it's not peak usage time. And lo and behold, I'm able to get on and post.
I am not going to rant about the Time Out my internet company has put me on. I am going to prevail over this ridiculous situation and I am going to post every day despite my problems.
And guess what's playing on late-night TV right now? One of my favorite little movies, The Princess Bride. I love this movie and I think it's partly due to the fact that I first saw it when we rented it years ago when the children were very young. We watched it as a family, and the boys and I really enjoyed it. It's a classic fairytale, with swordplay and giants, an evil king, a Dread Pirate, and a beautiful princess played by Robin Wright before she married Sean Penn.
I love some of the quotes in this movie.


Like my husband, Fezzik, played by Andre the Giant, had a penchant for rhyming:


Inigo Montoya: That Vizzini, he can *fuss*.
Fezzik: (thinking) Fuss, fuss . . . I think he like to scream at *us*.
Inigo Montoya: Probably he means no *harm*.
Fezzik: He's really very short on *charm*.
Inigo Montoya: You have a great gift for rhyme.
Fezzik: Yes, yes, some of the time.
Vizzini: Enough of that.
Inigo Montoya: Fezzik, are there rocks ahead?
Fezzik: If there are, we all be dead.
Vizzini: No more rhyming now, I mean it!
Fezzik: Anybody want a peanut?
Vizzini: Aarrrrggghhhhhh!!!


And my favorite:
Vizzini: I suppose you think you're brave, don't you?
Buttercup: Only compared to some.

Enjoy your Monday, everyone.

Enjoy your week off and just love the Princess Bride. Cute movie.

Ha! You're back on the net...the heck with the Wild Blue Yonder folks...they are poopey-heads!

Ha! Take that, Wild Blue Yonder. Love the movie, too. Good luck with all your check-ups today.

Yes, we've been having that icky weather, too. And I adore the Princess Bride! One of my favorite lines comes when they are leaving Miracle Max's --

"Have fun storming the castle! (Aside) Do you think it will work?"

"It would take a miracle."

Love your pics. funny, but I did almost the same one of water droplets on grass...

Enjoy your week off!
xoxo,
Mary

Glad you got on to post. We have been enjoying some lovely drenching heat and humidity here too - but it makes the gardens grow, so I try not to complain too much.
We also caught part of The Princess Bride last night - I think they were playing it over and over. No matter how many times I have seen it, if I run across it I have to watch for awhile.

good luck with your internet, have a good week!

Most quotable movie ever!

Yea! You're posting! Makes my day!

That second picture is wonderful!

That is my favorite movie of all time. We just bought the 20th anniversary edition and my kids love it too. (It's very funny that we were both thinking about it at the same time. I posted about the Princess Bride in my new name that quote game on my blog over the weekend!).

Welcome to Nea! Haven't seen you here before. So glad you stopped by.

Wow! I had no idea how many people love that movie as much as I do. And very interesting to find that at some point last night, we were all watching bits of it at the same time.

PS -- to make somebody's day just because I posted is my raison d'etre. Good one, Annie!

Power on and off. Time outs. Blogging can be difficult. Glad your hanging in there. I also love that movie.