The Switzerland of America

I left home just before dinnertime on Tuesday, after I picked up the pup from the vet and made sure he was doing fine. It was so very hot here in Maryland and I knew Adrienne had a nice cool pool in NJ. And so I headed over there, and picked up her mom, my friend Karen.
The pool was fantastic and just what we needed. 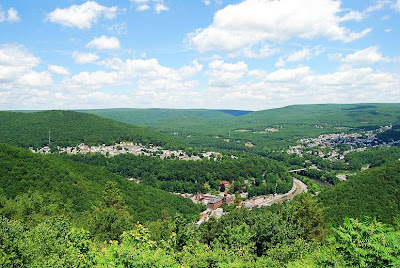 The next morning, we awoke to an absolutely stunning day. The skies were a bright blue, with puffy clouds and the air was soft and cool. A storm had come through in the evening, whisking all that hot and humid air out to sea. What a wonderful day to travel!
So after breakfast, and after Adrienne left for work, we were off. About an hour and a half north of her home, off the Blue Route (476) in PA was our destination. Karen and her husband, Jeff, have been trying to get me and my husband to come here with them for years. I don't know why we've never been able to get away at the same time, but I'm so glad I finally got to see this place.
Karen directed me to a viewing place that looks down on the town. See that mansion with the bright orange roof? I know it's difficult to see. It's almost in the center of the photo above. That's the town we're headed to. To the immediate right is the Lehigh River, and our destination is the town of Jim Thorpe, PA, hailed as "The Gateway to the Poconos". When I go to a new place and I really like it, I like to learn all about the history. I found out that the town was named after the athlete, Jim Thorpe, who died in 1953. 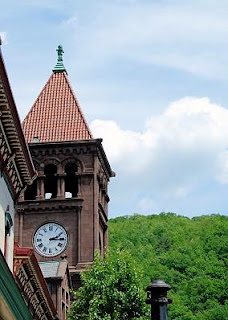 Originally, the town was called Mauch Chunk, which is the Indian name for "Sleeping Bear" and was founded in 1818 by the Lehigh Coal and Navigation Company, founded by Asa Packer. It quickly became a booming railroad and coal-shipping center. The city was the location of the trials of the Molly Maguires in 1876 which resulted in four men found guilty of murder. The old jail is still there, on Broadway St. It was closed most of the time we were there, however.
In 1954, the town adopted the name of Jim Thorpe, after his widow came to them asking for their help. Jim Thorpe's hometown couldn't afford a proper memorial and so she offered her husband's name to the town of Mauch Chunk, and they accepted, hoping to attract tourism and other attention to help its crumbling economy. The odd thing is that Jim Thorpe had never even set foot in this town.
This little town has been called "The Switzerland of America", due to its mountainous location, picturesque scenery and its architecture. 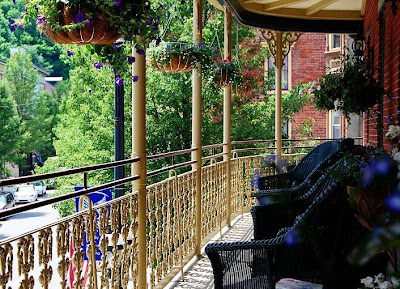 We stayed at one of the nicest places in the borough, the Inn at Jim Thorpe, long known for its hospitality and opulent rooms and suites. I was surprised to find out that in the early part of this century, this town was the #2 destination for honeymooners, with Niagra Falls at #1. But I was really surprised to find out that our hotel had a resident ghost! (More on that later).
The second floor has a balcony that runs the entire length of the hotel. With its ornate wrought iron railings, beautiful hanging baskets, and inviting wicker rocking chairs, we felt right at home. Mary at the Little Red House would absolutely love the Victorian charm of this town. There's an old cemetery that Tombstone Annie would adore exploring, and I saw something in the window of an eclectic gift shop that Mental Pause Momma could use. More on all that later on, too. 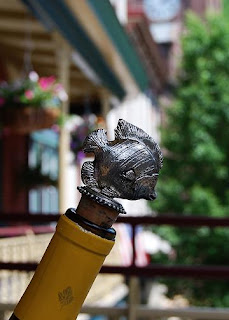 But this was our first day in town, and after we checked in early, we explored the main street for a couple of hours, and then settled down for a drink on the spacious veranda on the 2nd floor. I always bring my traveling wine glasses and a favorite wine stopper, so we were all set. It's funny, but when you're sitting outside, with your wine bottle in an ice bucket, sitting at the party table, everyone who came out (well, almost everyone) asked where we were from and wanted to chat with us.
I love doorways and there were some beautiful ones in town. Here's the door to the Inn. At a later time, I'll let you know how the second and third days went, ok? I'd like to address something else right now. 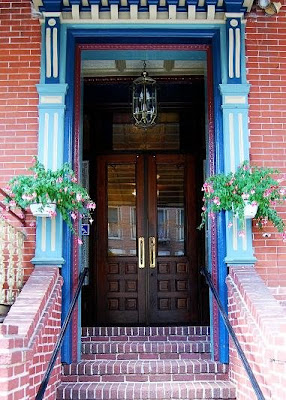 To all of you who wrote the lovely comments on the Mustard Story (see a couple of posts below), I can't tell you how surprised I was! This was a story that I almost didn't publish, just because it's, well, personal. If my husband read this blog, he'd be appalled! I've tried to show him several times, but he's so private. Such the opposite of me! I just want to thank everyone, especially those who have been faithful readers, who commented for the first time ever.
It's fine to just read this blog. It's what I used to do before I started blogging myself. I NEVER. EVER. COMMENTED. I mean, never. I just figured I didn't really have anything to say. And then, I started blogging myself. And suddenly, I realized how much it meant to have feedback on my pictures and my writing.
So, thank you, everyone. Didn't mean to make you cry. Or choke you up. Or have you lusting for the good taste of a gourmet mustard. But, back to the task at hand . . .
Road Trip ~ to be continued tomorrow!

What a fun trip. It is VERY beautiful. One of my best friends lives in PA and I can't wait to be able to go visit her again. We'll have to try to stop there. I love Victorian EVERYTHING. Have a great trip!

Gorgeous photos and extremely interesting history/narrative. I've not traveled to this part of the US and had no idea it was so very lovely. Thanks!

You're so right, Kate, I LOVE that building! I knew you would treat us to some fine photos. :) Enjoy your weekend!
xoxo,
Mary

The area looks lovely. Hey, I would have joined you for wine on the balcony too! That door is gorgeous (my new word...)

Ohh lovely. And always nice to know the history of a place. Looking forward to the rest of the photo-story. :)

Love the way you write, Kate.