In one of my posts a couple of months ago, I mentioned that Chuck Norris had been at my sister's wedding. People commented and said I should write about that, but what I didn't mention was that Chuck also gave me a photography tip that I still use today.
Really, he did! Read on, if you don't believe me.
My youngest sister, Ginny, got married to the guy of her dreams 11 years ago. Since they lived in California, they wanted to marry out there somewhere and settled on a resort about an hour north of Vegas, in the little town of Mesquite, Nevada. The hotel was fantastic, and they reserved almost a whole floor for their guests. All of my family flew out, as did his, and their friends came from far and near. We had a lot of fun at that wedding and I remember it with fondness.
The complex was equipped with a large beautiful pool, with a swim up bar and everything was beautifully landscaped. It was so nice sitting by the water with my family and sharing laughter and just being together. The wedding was also held outside, by the pool, in a little area they had staged just for such occasions.
On the morning of the wedding day, as we were waiting to process towards the altar, I heard a whisper going through the crowd and everyone was saying that Chuck Norris and his entourage were hanging out by the pool. We'd seen Chuck the day before when he'd shown up, so it was no surprise that he was there, but he was sitting right by the chairs reserved for the wedding guests, almost like he was attending my sister's wedding. In his bathing suit. I tried to keep focused on my task, which was to walk to the altar. Do not look at Chuck. In his bathing suit.
The wedding went smoothly. My sister was extraordinarily happy and it was a beautiful day.
So, you see, Chuck Norris did come to my sister's wedding. And crashed it, if you want to get technical about it. He sat by and watched the whole thing.
I got my photo tip from him the next day when my family and I were all outside sunning ourselves by the pool. Ginny and Jay had a beautiful little honeymoon cottage way over on the other side of the pool. Very private and nice. They had come out of their cottage and had just joined us. My sister, Judy, was there with her then-boyfriend (who is now her husband) who is a dead ringer for Kevin Costner. In fact, during our stay at the resort, and because celebrities like Chuck had been spotted, people were actually asking Rick for his autograph and calling him Kevin. Ok, I'll get on with it because you know how I digress all the time.
Judy noticed Chuck and his group had just shown up again, and was sitting by the pool. She wanted me to take a picture of her and Rick with Chuck, but she said she needed to change out of her bathing suit first and fix her hair. So she ran upstairs and a little while later she returned looking gorgeous, and asked my cowboy brother, Pete, to go over and ask Chuck to pose for a picture with her. Pete's brave like that. Especially when he's wearing his cowboy hat. Which really went well with that bathing suit hewas wearing, I might add.
Chuck's a nice guy in real life, and he willingly obliged. He asked where we were from and chatted with us a little bit. In front of everyone in his group, and those in our family, Judy went on to gush about how her sister, Katy, was going to take the picture, because "well, she's just such a good photographer and she takes all the family pictures". Then she handed me her camera, a little 35mm, which she assumed I'd know how to operate. "Oh", she went on to say, "her pictures are so good." So, I stood there with my sister's camera, perhaps I was a little bit starstruck, or maybe it was the two Long-Island iced teas I'd just drunk, but I stood there and although I'd managed to actually turn the camera on, nothing was happening when I looked through the viewfinder.
And that's when Chuck said, in front of my whole family, in front of everyone, "Um, Katy, you really need to remove the lens cap first."
I was really embarassed, but managed to laugh it off, take a good picture, and sit back down. In fact, everyone was laughing. Here my family was all saying, "Oh, let Katy take the picture, she takes good pictures." And I couldn't even remember to take off the darn lens cap. Anyway, I got over it pretty quick. I'm good like that.
And to this day, every time I use my camera, I still use that important tip that I got from my pal, Chuck, that day. It's really come in handy.
Here's the photo I took of my sister Judy, Chuck Norris, and Rick, by the pool at the resort in Mesquite, Nevada. Chuck was still smirking about the lens cap thing, as you can see. 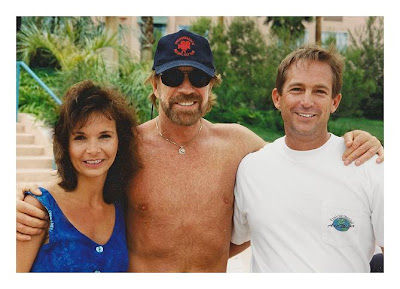 I can't tell you how many times I have left my lens cap on.

I like that you have the smirk forever captured. Hee.

Oh, what a great picture. And my gosh! Rick does look like Kevin Costner. That's almost scary. Even the way he holds his head is the same.

Chuck probably realized you were really nervous, and he thought it was cute.

Hilarious! And great pic too! I met Chuck's body double once..just thought I'd throw that in!

Funny story, mostly because I know exactly how you felt. I've done that so many times!

You did take a great picture once you got the lens cap off. What a wonderful memory to have.

hee hee... I always do stuff like that! (probably b/c I'm supposed to be the 'smart one' in the family!)

That's a great picture though! What a memory!

I hope you won't mind if I steal that little gem for myself - I am looking forward to taking some great photos now!

I'm so glad to hear that all the other photographers out there do the same dumb things I do sometimes!

I agree that Rick really looks like Kevin Costner. And he's much nicer (although I've never met Kevin Costner). Frankly, Chuck Norris was really nice, too.

An aside to this story is one my brother in law, Dave, tells. At the end of the week, he ran into Chuck in the lobby and people were surrounding him asking for his autograph. Dave went up to him and said it would be funny if Chuck could come up to Dave and ask for Dave's autograph. And Chuck did! Dave sat on the couch in the lobby and Chuck acted real surprised to see him, asked for his autograph and everyone around was asking, "who's that?" "He must be famous."

Pretty cool, that Chuck is.

Hey, welcome Dr. John. Thanks for stopping by.

Rick's a cutie pie! And I must say, you did very well taking that picture... you know, after removing the lens cap and all. Good story. *chuckle*

That is just TOO funny! And Rick is a Kevin lookalike!

Wow..you rock...even with your lens cap on, lol! I really love your pictures and when I grow up I am going to take really good ones, just like you!

Great story!!! And I never ever leave the lens cap. No way...

What a neat experience.....thanks for finally telling us about it!

i love this story!! it's like a two-fer for me - i love chuck norris and i love kevin costner!