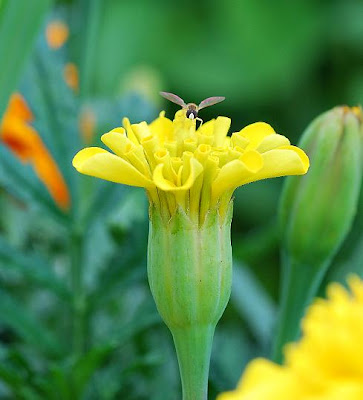 After our bike ride last night, George and I went outside to visit my husband in his garden. I took my camera with me and put the macro lens on it to see what I could see. I had planted marigolds all around the front of the garden this year and we have morning glories that reseeded themselves that are beginning to climb up the garden arch my husband built several years ago.
I was lying down in the grass and I kept humming a tune and I wondered why I was thinking of inchworms, but then I realized why. 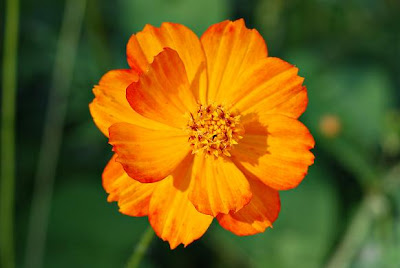 Inchworm, inchworm
Measuring the marigolds
You and your arithmetic
You'll probably go far. 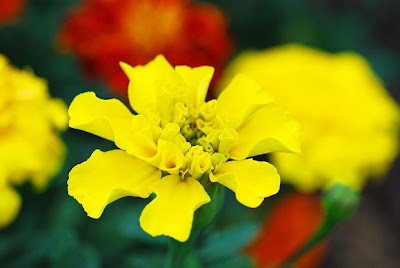 Inchworm, inchworm
Measuring the marigolds
Seems to me you'd stop and see
How beautiful they are. 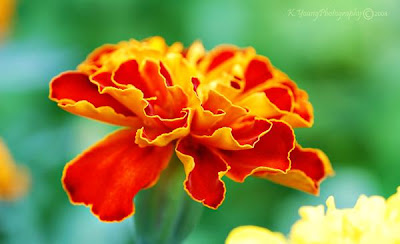 Apologies to those who get songs stuck in their heads as I do. I've been singing it every time I opened up a marigold picture in Photoshop. They really didn't need much done to them but a little cropping and a slight action I used called Boutwell's Magic Glasses. It's a very understated action that incorporates brightening, a slight sharpening and just a little pop. I downloaded it as a free sample from Totally Rad Actions. I used it on the last picture in this post.
Have a wonderful Monday, everyone!

Your photography is absolutely magnificent! I just love your flower shots. If you are wondering who I am, I am the one with the "quirks" from a friend's blog. And yes, today I had guests over for dinner and went absolutely nutso prior to getting dinner on the table! Anyway, I love your photos and will read more of your fun blog.

Oh, thank you Deb. I saw you over at Debra (aka Doris, Mimi)'s site and am glad to meet the person with the "quirks".

Join the club. I've heard tell that I have lots of issues. I don't mind in the least.

Yep! That did it! I'll be humming "Inchworm, Inchworm" for days now!

I love your photos. I will have to try some photoshopping on my pictures. I have not done any yet. I take lots of macro pictures. Come over and visit my blog sometime.

Gorgeous pictures as always Kate. I love your flower pics.

So pretty Kate - marigolds are one of my favorite flowers. So simple and so lovely.

Happy Monday Kate! The flowers look lovely. I'm so jealous of your macro lens I can't put it into words.

I wish I had a macro lens. Your pictures are just beautiful.

OK, I've got macro envy, too! :) Beautiful, Kate!
xoxo,
Mary
btw, your husband cooks AND gardens? How cool is that?!

Hi there, Kate. I must admit that you are a bad influence on my struggling finances. I have the Nikkor 150mm macro lens (love it!). But after reading back through your older postings, I read about your new Nikkor 60mm lens (good call on exchanging the mixer for the lens)and have had macro envy ever since. So, I just ordered the 60mm macro and hope to get it within the week. Now I have to download the Boutwell's Magic Glasses action. Thank goodness it's free! Thanks for the photography tips. If I follow all your recommendations, will I get to be as good as you? Hmmmm...sadly I think not. Your marigold is absolutely lovely, Kate! Happy Monday to you too:)

P.S. Thanks for visiting my blog!

Hello again, Kate. I just read your comment on my blog. I'd be glad to help you with Flickr. The best way to reach me is at debra.rector@porex.com (instead of my personal e-mail because I don't check it often). You've helped me greatly with all your photgraphy tips. I'd love to return the favor!

Wow, thank you everyone. That macro lens is a Godsend. It takes nice pictures. But Debra, I don't know what you mean by being as good as me? Your photographs are astounding and if people want to see your site, they should go here to find out:
http://www.georgiarectors.blogspot.com/

There is that song thing again....drat! My marigolds will now be making me sing inchworm all the while killing the stinking slugs we get here. Ha ha!