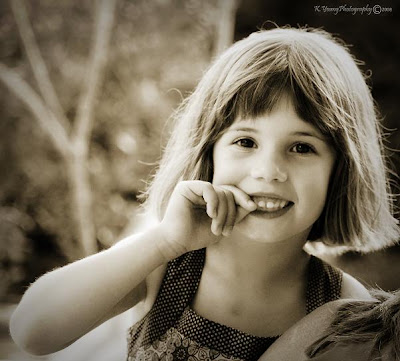 These are a few photos I took on Saturday at my niece's college graduation party in NJ. We had perfect weather, and my husband's sister, Helen and her husband, Bob, have a fantastic home with a beautiful backyard that includes a pool. Not all of the family could attend, for some reason or other, but we had a good time, nonetheless. 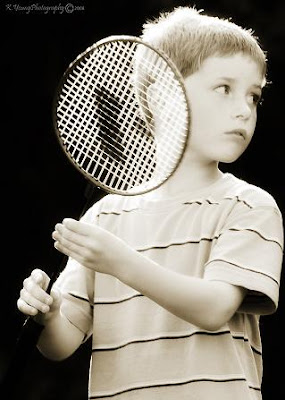 I took my camera, like I always do, but this time I put the zoom lens on and sat back and let it all happen. I'm sneaky that way.
The first picture is Meredith. She knew what I was up to and spent a lot of her time trying to avoid the nice lady with the camera. But she soon warmed to me, and I got her to come from behind her mother for this shot. I think it's my favorite out of all the pictures I took. 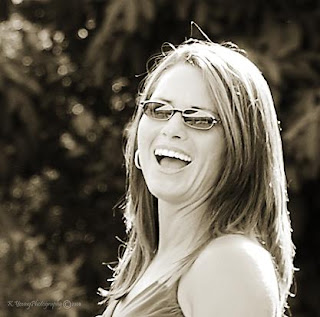 For all of these photos, I used Pioneer Woman's Lovely and Etheral action after making the initial adjustments I usually do. For some, I added another layer using Doug Boutwell's Super Fun Happy action and lowered the opacity a lot. It's one of the free sample actions I got from Totally Rad. But Meredith here, as well as the other pictures shown here, looks great in this sepia toned B&W. And to achieve that, I used Kevin Kubota's Chocolate Syrup action. I love how rich and creamy it looks, after you run a skin cream action to get it ready for the sepia. 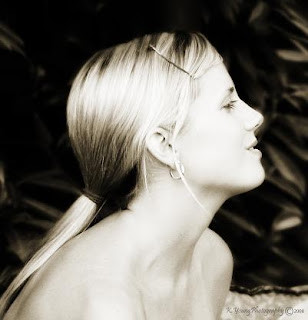 I know it sounds like a lot, but it only takes a couple of minutes. That's what's so great about Photoshop actions. I don't have to go through hoops to get a picture to the state I can see it in my mind. I can run an action and voila! Life is good.
The second picture is Meredith's little brother, Billy. Then we have her mom, Chris. She looks like a young Maria Shriver, doesn't she? Following Chris is my lovely niece, Kim, who is probably either going to be very mad or very glad that I put this picture in the blog. She might hate it, who knows? Kim, if you hate it, call me, ok? I promise I'll take it out. I took it while you were over by the patio chairs talking to your grandmother and telling her some story. 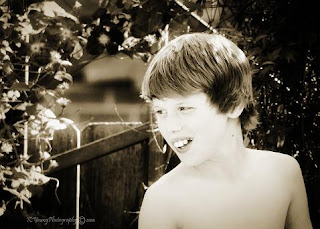 Following Kim is Meredith's big brother, Danny. He'll probably hate this too, but he's not getting a vote. Sorry, Danny.
And finally, we've got Kim and her friends playing Cups. On the far left is my sister in law, Helen (Kim's mom) who is learning the game. In the center, at the end of the table is my youngest son, Shaun. He's the one holding his arm up. You've seen him here before. 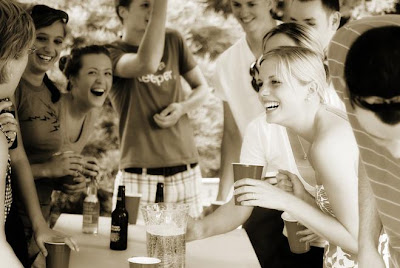 These were all just ordinary, run of the mill pictures. And with the help of several actions, they turned into portraits with a dramatic effect. We all had a nice time at the party Saturday. Congratulations to Kim! And really, I mean it, Kim. If you want it out, it will disappear . . .

Those photos are just gorgeous! Chocolate Syrup is a very good thing!

You have the most beautiful family members. They could all be models!

Wow!! Those photos are so beautiful. I love the chocolate syrup action. Make me want to go right out and buy Photoshop.

Yeah, that action is one of my favorites in this set. And that last picture looks like a beer commercial or something. I think the action makes you look better. I should try it on myself, maybe I'd look like a model, too! HA!

Honestly, I took a lot of duds, too. Pictures that I really need to delete immediately from my folder.

Beautiful shots...syrup or no, they are great! And I hope Kim approves...what a beauty!

Looks like a great time CG - and I love the edits - just enough and so lovely!

They are awesome shots, Kate! I am going through Photoshop withdrawal, because it was a download from the internet on my old PC and I don't have it on my new mac. I'm trying to decide whether to get Elements, or ask for CS3 for Christmas...
xoxo,
Mary

Those all look so beautiful. Now I'm really "jonesing" (if a woman can do that) for a good DSLR camera and Photoshop!!!

Ordinary, run of the mill pictures, with a few "actions" turned into extraordinary photos!

Fantastic! I've always loved chocolate, so am not surprised it works magic with photos, too!

The lovely faces are works of art! I thought, too, that the last photo looked like it could be a magazine or TV ad.

Bravo! You could get hired by People Magazine, I think!

Really outstanding. Other comments express the same... models are your relatives! :0

Those are great pictures and the actions really added a lotof depth. But you took such great shots to begin with, so give yourself credit!! :) And you had lovely subjects to work with, too!